Andrew Stephenson MP welcomes benefits of £2,341,000 in funding for flood protection in Pendle 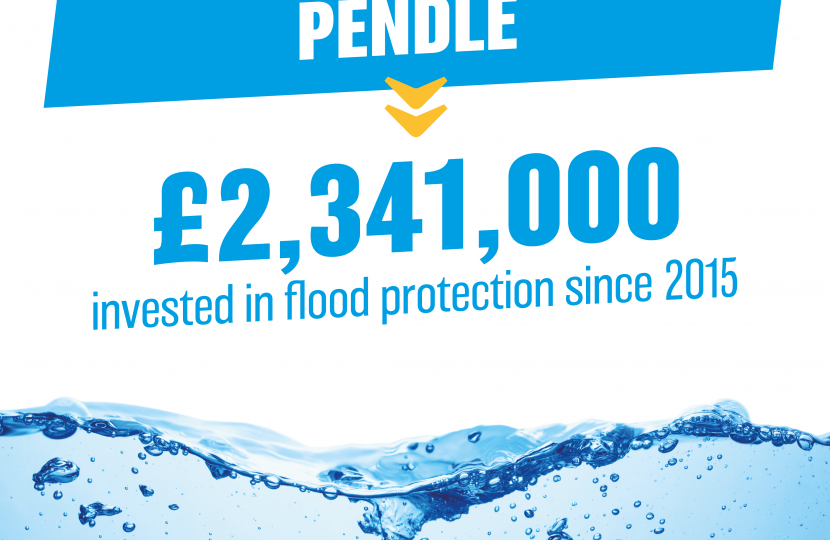 *  Pendle has received £2.34 million in investment to help protect against flooding and coastal erosion as part of the Conservative Government’s investment of £2.6 billion over six years for improving flood and coastal defences.

*  Exceeding initial targets, over 314,000 homes and 580,000 acres of agricultural land are better protected from flooding since 2015,  and thousands of businesses, communities, as well as critical infrastructure have been given extra protection.

*  The flood defences targeted towards the areas that need them most have saved the economy more than £28 billion in damages to homes and businesses in communities across the country.

Homes and businesses in Pendle are better protected from flooding and coastal erosion now that the Conservative Government has exceeded its target to boost flood protection by 2026– 27.

Investment in flood defences has been spread across every region of England, with Pendle receiving £2,341,000 in investment since 2015.

The £2.6 billion six-year programme of work dedicated to improving flood and coastal defences has exceeded its original targets – with over 314,000 homes now better protected from flooding.

The Conservative Government’s Flood and Coastal Erosion Investment Plan outlines how a record £5.2 billion of investment over the next six years will be spent, including more than £860 million in 2021–22 on boosting the design and construction of more than 1,000 flooding alleviation schemes.

More than 850 new flood and coastal erosion defence projects have already been completed. Over 580,000 acres of agricultural land, as well as thousands of businesses, communities and major infrastructure have been protected – including more than 8,000 kilometres of roads.

The Conservative Government’s funding prioritised areas where flood defences were needed the most, supporting communities at high risk of flooding. New flood schemes in the most deprived parts of the country have also qualified for funding at 2.25 times the rate of other areas.

According to estimates, the programme has saved the economy more than £28 billion in damages to homes and businesses through the extra protection provided to communities across the country.

Commenting, Andrew Stephenson said: “Flooding can devastate communities, including here in Pendle, and so we must put in place protections to protect our homes and livelihoods from the impact of extreme weather.

“That is why I welcome the £2,341,000 invested already by the Conservative Government to protect homes and businesses in Pendle with flood alleviation schemes – helping to protect homes from flooding and coastal erosion.

“This investment is helping to guard our homes and families from the devastating impact of flooding, giving our communities the reassurance they need as we Build Back Better from the pandemic.”

Commenting, Environment Secretary George Eustice said: “Our programme of work has protected over 314,000 properties, defending people, communities, and businesses from flooding and coastal erosion. We know that there is still more to do, so we are doubling our investment with a record £5.2 billion over the next six years.”