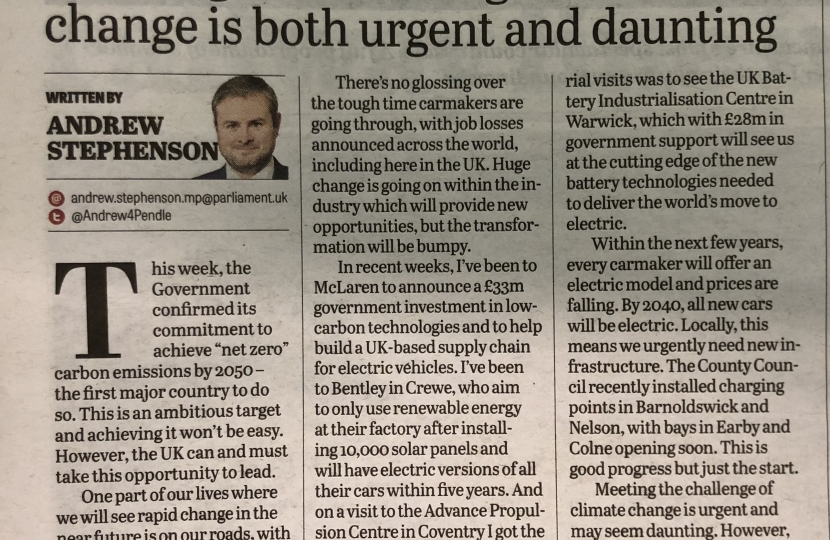 This week, the Government confirmed its commitment to achieve ‘net zero’ carbon emissions by 2050 – the first major country to do so. This is an ambitious target and achieving it won’t be easy. However, the UK can and must take this opportunity to lead.

One part of our lives where we will see rapid change in the near future is on our roads, with the transition to electric cars. As Minister responsible for the automotive sector, I’m meeting with our major car-makers and seen the change that is about to come.

There’s no glossing over the tough time carmakers are going through, with job losses announced across the world, including here in the UK. Huge change is going on within the industry which will provide new opportunities, but the transformation will be bumpy.

In recent weeks, I’ve been to McLaren to announce a £33 million government investment in low-carbon technologies and to help build a UK-based supply chain for electric vehicles. I’ve been to Bentley in Crewe, who aim to only use renewable energy at their factory after installing 10,000 solar panels and will have electric versions of all their cars within five years. And on a visit to the Advance Propulsion Centre in Coventry I got the opportunity to see the first ever all electric Aston Martin.

One in every five electric vehicles sold in Europe is already made in the UK. We are building on that. One of my first Ministerial visits was to see the UK Battery Industrialisation Centre in Warwick, which with £28 million in government support will see us at the cutting edge of the new battery technologies needed to deliver the world’s move to electric.

Within the next few years, every carmaker will offer an electric model and prices are falling. By 2040, all new cars will be electric. Locally, this means we urgently need new infrastructure. The County Council recently installed charging points in Barnoldswick and Nelson, with bays in Earby and Colne opening soon. This is good progress but just the start.

Meeting the challenge of climate change is urgent and may seem daunting. However, what I’ve seen is British business rising to the challenge and responding through cutting-edge technological innovation. I’m pleased to be able to support them in doing so.