Barnoldswick and Earby Times, Colne Times and Nelson Leader Column from 24th May 2019 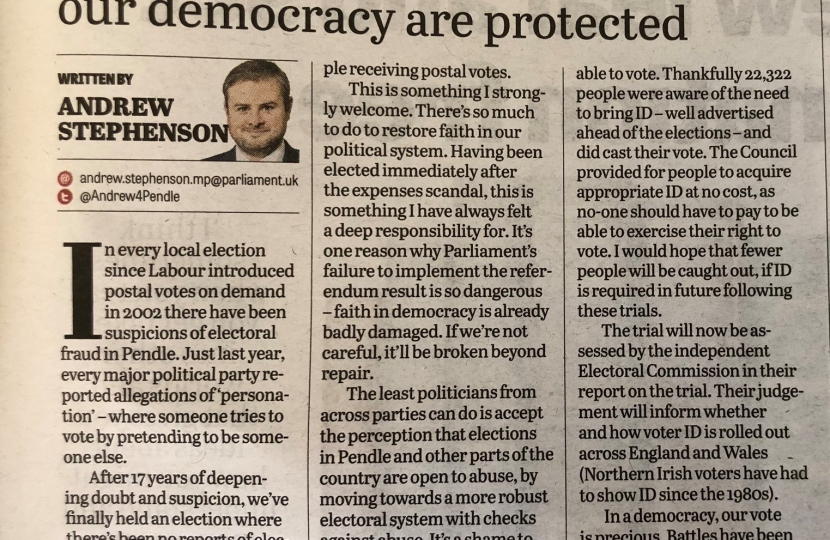 In every local election since Labour introduced postal votes on demand in 2002 there have been suspicions of electoral fraud in Pendle. Just last year, every major political party reported allegations of ‘personation’ – where someone tries to vote by pretending to be someone else.

After 17 years of deepening doubt and suspicion, we’ve finally held an election where there’s been no reports of electoral fraud and the results accepted as being legitimate and fair. This is because of the voter ID trial alongside enhanced checks by the Council on people receiving postal votes.

This is something I strongly welcome. There’s so much to do to restore faith in our political system. Having been elected immediately after the expenses scandal, this is something I have always felt a deep responsibility for. It’s one reason why Parliament’s failure to implement the referendum result is so dangerous – faith in democracy is already badly damaged. If we’re not careful, it’ll be broken beyond repair.

The least politicians from across parties can do is accept the perception that elections in Pendle and other parts of the country are open to abuse, by moving towards a more robust electoral system with checks against abuse. It’s a shame to see some other political parties attacking efforts to do just that.

I was sorry to read reports that 119 people were caught out by the trial and were unable to vote. Thankfully 22,322 people were aware of the need to bring ID – well advertised ahead of the elections – and did cast their vote. The Council provided for people to acquire appropriate ID at no cost, as no-one should have to pay to be able to exercise their right to vote. I would hope that fewer people will be caught out, if ID is required in future following these trials.

The trial will now be assessed by the independent Electoral Commission in their report on the trial. Their judgement will inform whether and how voter ID is rolled out across England and Wales (Northern Irish voters have had to show ID since the 1980s).

In a democracy, our vote is precious. Battles have been fought for our right to an equal say in how our country, county and borough are run. It is right that our vote and democracy be protected.