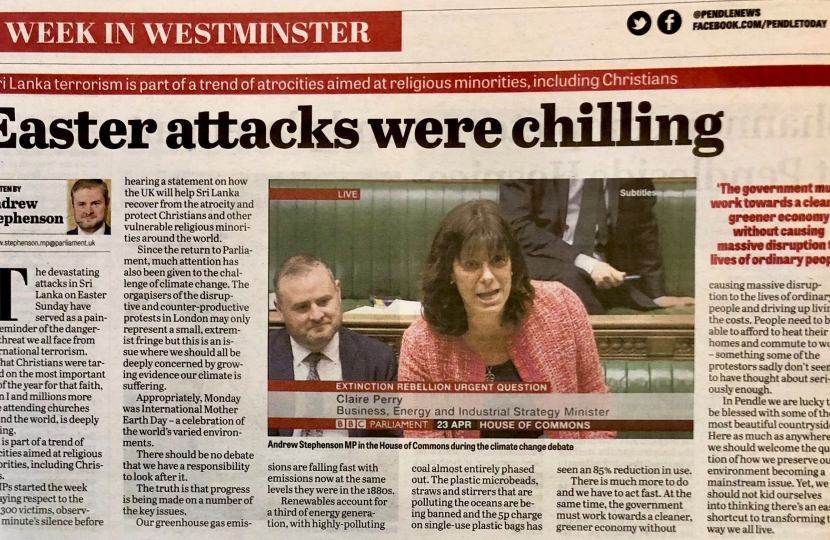 The devastating attacks in Sri Lanka on Easter Sunday have served as a painful reminder of the dangerous threat we all face from international terrorism. That Christians were targeted on the most important day of the year for that faith, when I and millions more were attending churches around the world, is deeply chilling. It is part of a trend of atrocities aimed at religious minorities, including Christians.

MPs started the week by paying respect to the over 300 victims, observing a minute’s silence before hearing a statement on how the UK will help Sri Lanka recover from the atrocity and protect Christians and other vulnerable religious minorities around the world.

Much attention has also been given to the challenge of climate change. The organisers of the disruptive and counter-productive protests in London may only represent a small, extremist fringe but this is an issue where we should all be deeply concerned by growing evidence our climate is suffering.

Appropriately, Monday was International Mother Earth Day – a celebration of the world’s varied environments. There should be no debate that we have a responsibility to look after it.

The truth is that progress is being made on a number of the key issues. Our greenhouse gas emissions are falling fast with emissions now at the same levels they were in the 1880s. Renewables account for a third of energy generation, with highly-polluting coal almost entirely phased out. The plastic microbeads, straws and stirrers that are polluting the oceans are being banned and the 5p charge on single-use plastic bags has seen an 85% reduction in use.

There is much more to do and we have to act fast. At the same time, the government must work towards a cleaner, greener economy without causing massive disruption to the lives of ordinary people and driving up living the costs. People need to be able to afford to heat their homes and commute to work – something some of the protestors sadly don’t seem to have thought about seriously enough.

In Pendle we are lucky to be blessed with some of the most beautiful countryside. Here as much as anywhere, we should welcome the question of how we preserve our environment becoming a mainstream issue. Yet, we should not kid ourselves into thinking there’s an easy shortcut to transforming the way we all live.