Barnoldswick and Earby Times, Colne Times and Nelson Leader Column from 31st May 2019 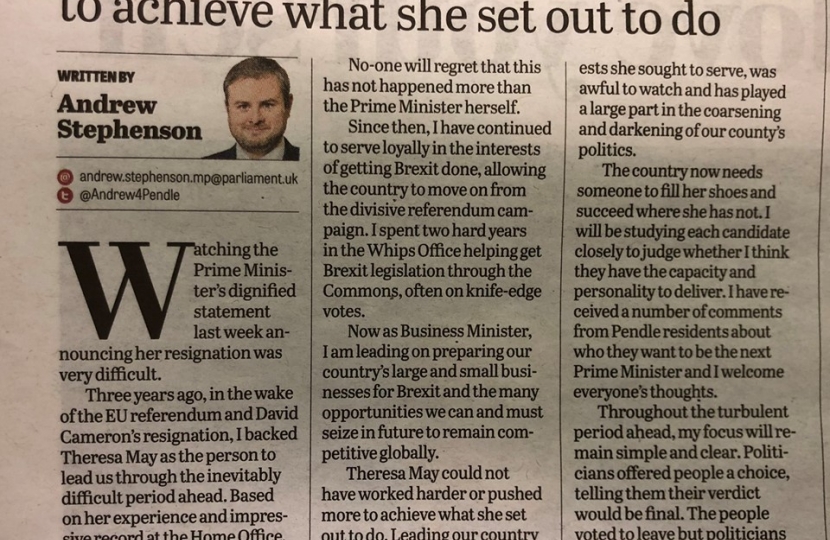 Three years ago, in the wake of the EU referendum and David Cameron’s resignation, I backed Theresa May as the person to lead us through the inevitably difficult period ahead. Based on her experience and impressive record at the Home Office, her strength of character and message of unity, I believed that she was the person best placed to deliver Brexit and bring the country back together again.

No-one will regret that this has not happened more than the Prime Minister herself.

Since then, I have continued to serve loyally in the interests of getting Brexit done, allowing the country to move on from the divisive referendum campaign. I spent two hard years in the Whips Office helping get Brexit legislation through the Commons, often on knife-edge votes.

Now as Business Minister, I am leading on preparing our country’s large and small businesses for Brexit and the many opportunities we can and must seize in future to remain competitive globally.

Theresa May could not have worked harder or pushed more to achieve what she out to do. Leading our country is incredibly hard even in the easiest of times and these are not easy times. The abuse she has suffered, including from some of those in whose interests she seeked to serve, was awful to watch and has played a large part in the coarsening and darkening of our county’s politics.

The country now needs someone to fill her shoes and succeed where she has not. I will be studying each candidate closely to judge whether I think they have the capacity and personality to deliver. I have received a number of comments from Pendle residents about who they want to be the next Prime Minister and I welcome everyone’s thoughts.

Throughout the turbulent period ahead, my focus will remain simple and clear. Politicians offered people a choice, telling them their verdict would be final. The people voted to leave but politicians have failed to deliver. We must deliver. I will do all that I can to ensure that Brexit happens, as soon as possible, with or without a deal.