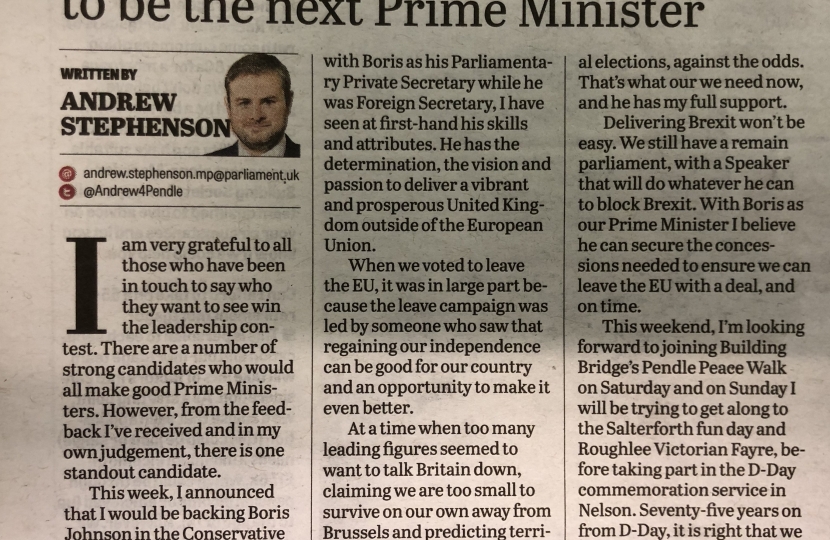 I am very grateful to all those who have been in touch to say who they want to see win the leadership contest. There are a number of strong candidates who would all make good Prime Ministers. However, from the feedback I’ve received and in my own judgement, there is only one standout candidate.

This week, I announced that I would be backing Boris Johnson in the Conservative leadership election as the person I think can best lead my party and our country at this time.

Having worked closely with Boris as his PPS (Parliamentary Private Secretary) while he was Foreign Secretary, I have seen at first-hand his skills and attributes. He has the determination, the vision and passion to deliver a vibrant and prosperous United Kingdom outside of the European Union.

When we voted to leave the EU, it was in large part because the leave campaign was led by someone who saw that regaining our independence can be good for our country and an opportunity to make it even better.

At a time when too many leading figures seemed to want to talk Britain down, claiming we are too small to survive on our own away from Brussels and predicting terrible outcomes if we did vote to leave, Boris presented a positive vision. That’s why Leave won, against the odds. It’s why Boris won the London Mayoral elections, against the odds. That’s what we need now and he has my full support.

Delivering Brexit won't be easy. We still have a remain parliament, with a Speaker that will do whatever he can to block Brexit. With Boris as our Prime Minister I believe he can secure the concessions needed to ensure we can leave the EU with a deal, and on time.

This weekend, I’m looking forward to joining Building Bridge’s Pendle Peace Walk on Saturday and on Sunday I will be trying to get along to the Salterforth fun day and Roughlee Summer Fayre, before taking part in the D-Day commemoration service in Nelson’s Memorial Square. 75 years on from D-day, it is right that we remember the sacrifices that were made by previous generations to keep Britain and Europe free and offer them our undying gratitude.