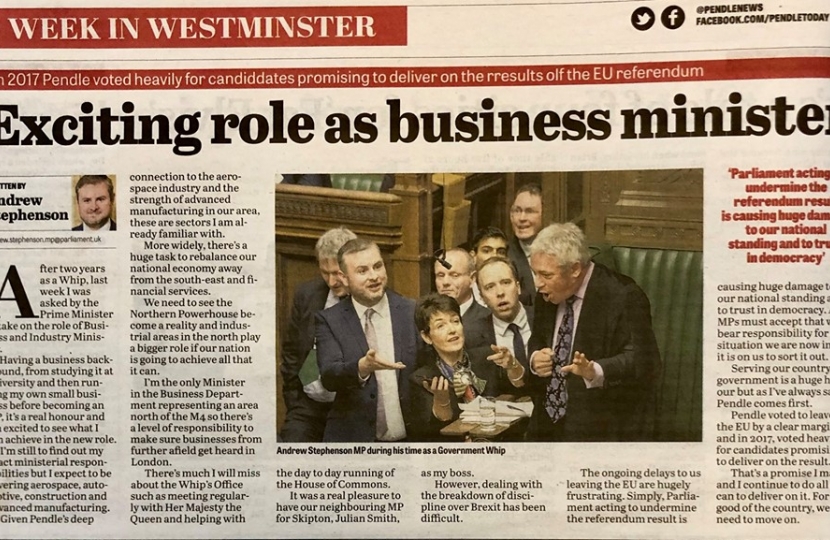 After two years as a Whip, last week I was asked by the Prime Minister to take on the role of Business and Industry Minister. Having a business background, from studying it at university and then running my own small business before becoming an MP, it’s a real honour and I’m excited to see what I can achieve in the new role.

More widely, there’s a huge task to rebalance our national economy away from the south-east and financial services. We need to see the Northern Powerhouse become a reality and industrial areas in the north play a bigger role if our nation is going to achieve all that it can. I’m the only Minister in the Business Department representing an area north of the M4 so there’s a level of responsibility to make sure businesses from further afield get heard in London.

There’s much I will miss about the Whip’s Office such as meeting regularly with Her Majesty the Queen and helping with the day to day running of the House of Commons. It was a real pleasure to have our neighbouring MP for Skipton, Julian Smith, as my boss.

However, dealing with the breakdown of discipline over Brexit has been difficult. The ongoing delays to us leaving the EU are hugely frustrating. Simply, Parliament acting to undermine the referendum result is causing huge damage to our national standing and to trust in democracy. All MPs must accept that we bear responsibility for the situation we are now in and it is on us to sort it out.

Serving our country in government is a huge honour but as I’ve always said, Pendle comes first. Pendle voted to leave the EU by a clear margin and in 2017, voted heavily for candidates promising to deliver on the result. That’s a promise I made and I continue to do all I can to deliver on it. For the good of the country, we need to move on.