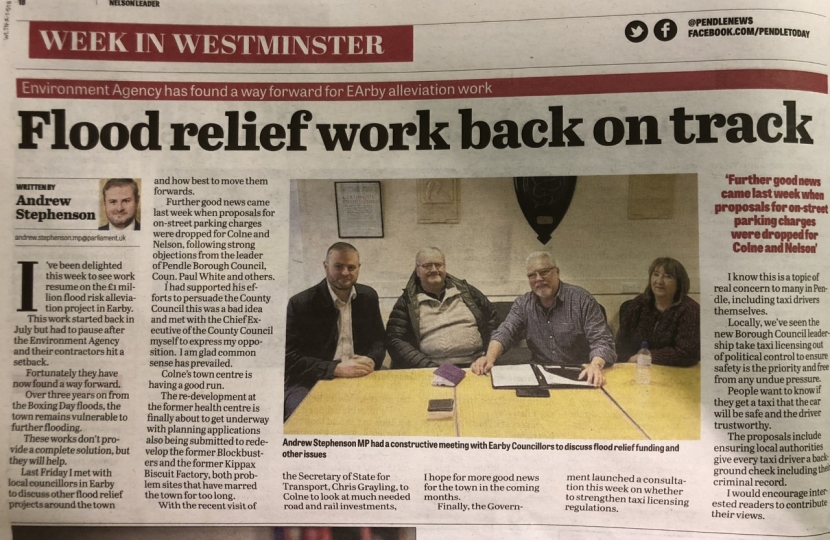 I’ve been delighted this week to see work resume on the £1 million flood risk alleviation project in Earby. This started back in July but had to pause after the Environment Agency and their contractors hit a setback. However, fortunately they have now found a way forward.

Over three years on from the Boxing Day floods, the town remains vulnerable to further flooding.  These works don’t provide a complete solution, but they will help.  Last Friday I met with local Councillor in Earby to discuss other flood relief projects around the town and how best to move them forwards.

Further good news came last week when proposals for on-street parking charges were dropped for Colne and Nelson, following strong objections from the leader of Pendle Borough Council, Cllr Paul White and others.  I had supported his efforts to persuade the County Council this was a bad idea and met with the Chief Executive of the County Council myself to express my opposition.  I am glad commons sense has prevailed.

Colne’s town centre is having a good run. The re-development at the former health centre is finally about to get underway with planning applications also being submitted to redevelop the former Blockbusters and the former Kippax Biscuit Factory, both problem sites that have marred the town for too long.  With the recent visit of the Secretary of State for Transport, Chris Grayling, to Colne to look at much needed road and rail investments, I hope for more good news for the town in the coming months.

Finally, the Government launched a consultation this week on whether to strengthen taxi licensing regulations. I know this is a topic of real concern to many in Pendle, including taxi drivers themselves. Locally, we’ve seen the new Borough Council leadership take taxi licensing out of political control to ensure safety is the priority and free from any undue pressure.

People want to know if they get a taxi that the car will be safe and the driver trustworthy. The proposals include ensuring local authorities give every taxi driver a background check including their criminal record. I would encourage interested readers to contribute their views.