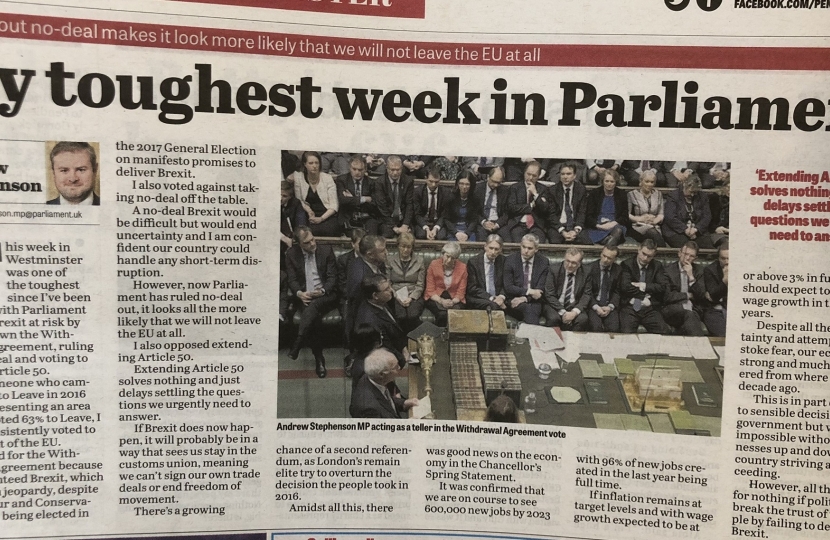 This week in Westminster was one of the toughest since I’ve been elected, with Parliament putting Brexit at risk by voting down the Withdrawal Agreement, ruling out no-deal and voting to extend Article 50.

As someone who campaigned to Leave in 2016 and representing an area that voted 63% to Leave, I have consistently voted to get us out of the EU. I voted for the Withdrawal Agreement because it guaranteed Brexit, which is now in jeopardy, despite all Labour and Conservative MPs being elected on manifesto promises to deliver Brexit.

I also voted against taking no-deal off the table. A no-deal Brexit would be difficult but would end uncertainty and I am confident our country could handle any short-term disruption. However, now Parliament has ruled no-deal out, it looks all the more likely that will not leave the EU at all.

If Brexit does now happen, it will probably be in a way that sees us stay in the customs union, meaning we can’t sign our own trade deals or end freedom of movement. There’s a growing chance of a second referendum, as London’s remain elite try to overturn the decision the people took in 2016.

Amidst all this, there was good news on the economy in the Chancellor’s Spring Statement. It was confirmed that we are on course to see 600,000 new jobs by 2023 with 96% of new jobs creating in the last year being full time. If inflation remains at target levels and with wage growth expected to be at or above 3% in future, we should expect to see real wage growth in the coming years.

Despite all the uncertainty and attempts to stoke fear, our economy is strong and much recovered from where it was a decade ago. This is in part down to sensible decisions by government but would be impossible without businesses up and down the country striving and succeeding.

However, all this will be for nothing if politicians break the trust of the people by failing to deliver on Brexit.