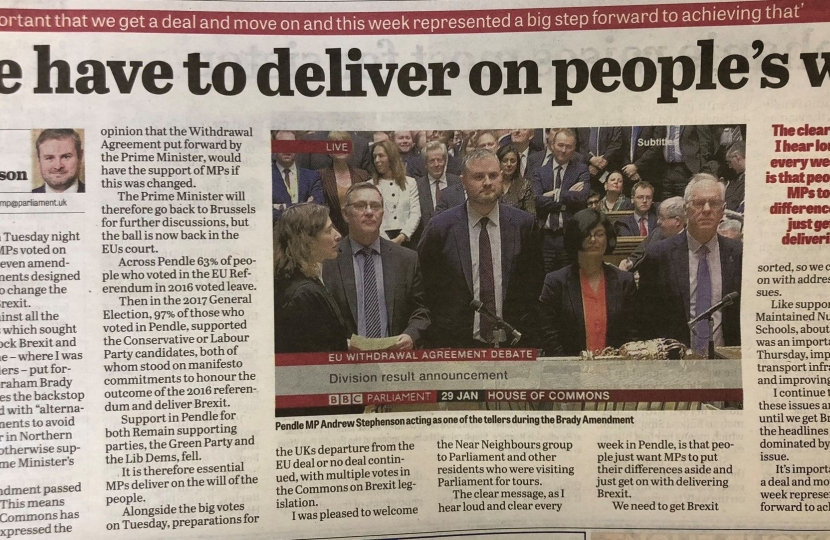 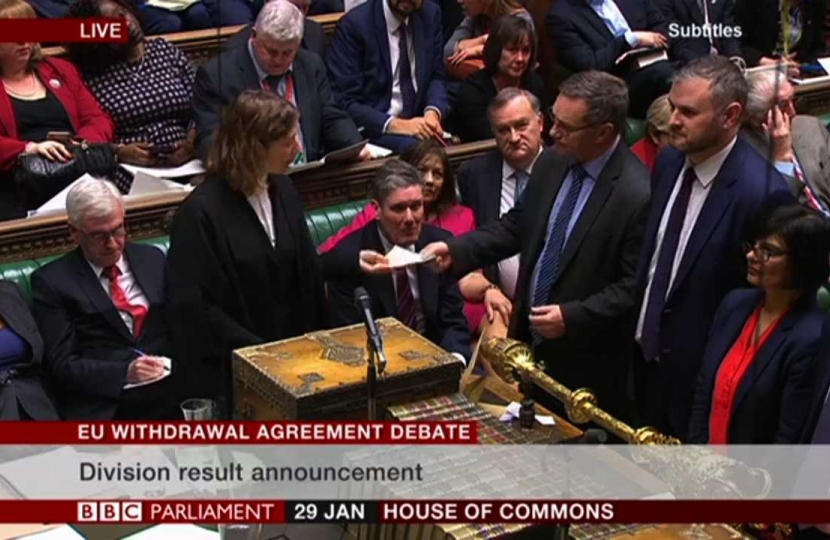 On Tuesday night MPs voted on seven amendments designed to change the direction of Brexit.

I voted against all the amendments which sought to delay or block Brexit and supported one (where I was one of the tellers) put forward by Sir Graham Brady which requires the backstop to be replaced with "alternative arrangements to avoid a hard border in Northern Ireland" but otherwise supports the Prime Minister's deal. This amendment passed by 317 to 301. This means the House of Commons has now clearly expressed the opinion that the Withdrawal Agreement put forward by the Prime Minister, would have the support of MPs if this was changed. The Prime Minister will therefore go back to Brussels for further discussions, but the ball is now back in the EUs court.

Across Pendle 63% of people who voted in the EU Referendum in 2016 voted leave. Then in the 2017 General Election, 97% of those who voted in Pendle, supported the Conservative or Labour Party candidates, both of whom stood on manifesto commitments to honour the outcome of the 2016 referendum and deliver Brexit. Support in Pendle for both Remain supporting parties, the Green Party and the Lib Dems, fell. It is therefore essential MPs deliver on the will of the people.

Alongside the big votes on Tuesday, preparations for the UKs departure from the EU deal or no deal continued, with multiple votes in the Commons on Brexit legislation. I was pleased to welcome the Near Neighbours group to Parliament and other residents who were visiting Parliament for tours. The clear message, as I hear loud and clear every week in Pendle, is that people just want MPs to put their differences aside and just get on with delivering Brexit.

We need to get Brexit sorted, so we can then get on with addressing other issues. Like supporting our Maintained Nursery Schools, about which there was an important debate on Thursday, improving our transport infrastructure, and improving our NHS. I continue to work on all these issues and more, but until we get Brexit sorted, the headlines are going to be dominated by just this one issue. It’s important that we get a deal and move on and this week represented a big step forward to achieving that.