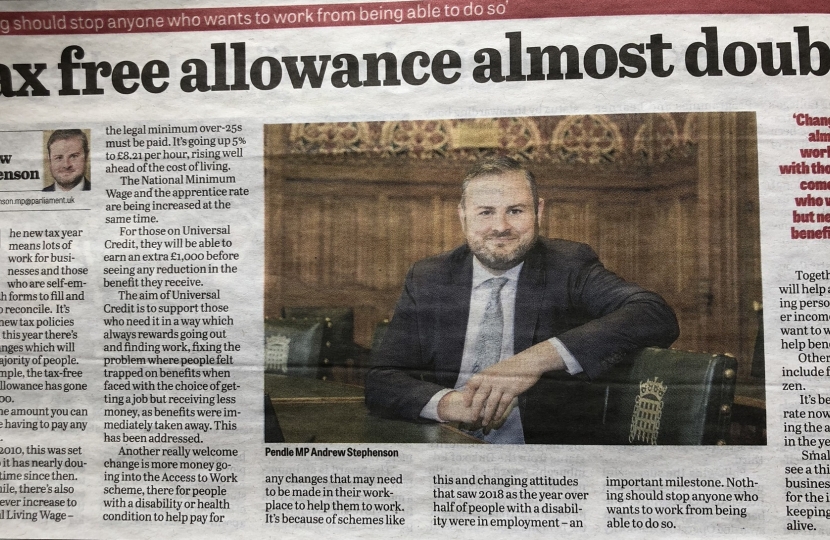 The new tax year means lots of work for businesses and those who are self-employed, with forms to fill and accounts to reconcile.  It’s also when new tax policies kick in and this year there’s several changes that will help the majority of people.

For example, the tax-free Personal Allowance has gone up to £12,500. That’s the amount you can earn before having to pay any income tax. Back in 2010, this was set at £6,475 so it’s nearly doubled in that time.

Meanwhile, there’s also the biggest ever increase to the National Living Wage – the legal minimum over-25s must be paid. It’s going up 5% to £8.21 per hour, rising well ahead of the cost of living. The National Minimum Wage and the apprentice rate are being increased too.

For those on Universal Credit, they will be able to earn an extra £1,000 before seeing any reduction in the benefit they receive. The aim of Universal Credit is to support those who need it in a way that always rewards going out and finding work, fixing the problem where people felt trapped on benefits when faced with the choice of getting a job but receiving less money, as benefits were immediately taken away. This has been addressed.

Another really welcome change is more money going into the Access to Work scheme, there for people with a disability or health condition to help pay for any changes that may need to be made in their workplace to help them to work. It’s because of schemes like this and changing attitudes that saw 2018 as the year over half of people with a disability were in employment – an important milestone. Nothing should stop anyone who wants to work from being able to do so.

Together, these changes will help almost every working person with those on lower incomes and those who want to work but need extra help benefitting the most.

Other important changes include fuel duty being frozen. It’s been kept at the same rate now for nine years, saving the average driver £1,000 in the year ahead.

Smaller retailers will also see a third taken off their business rates – great news for the independent shops keeping our high streets alive.