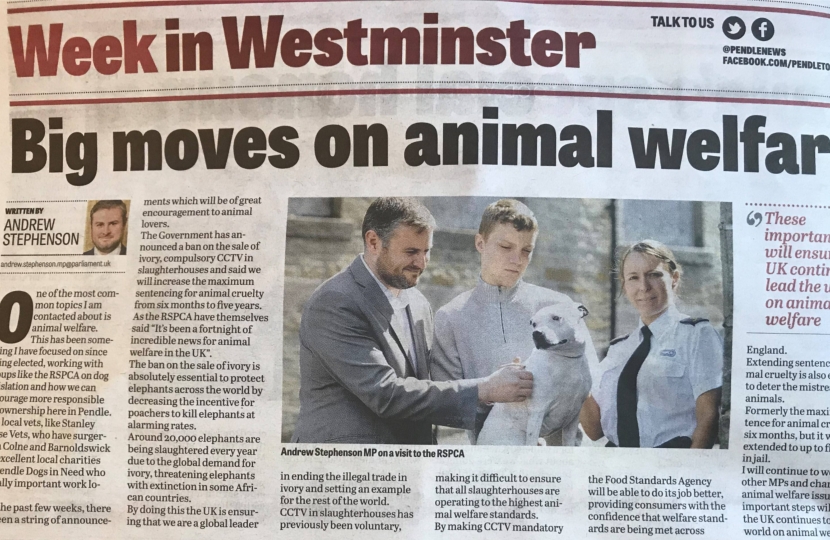 One of the most common topics I am contacted about is animal welfare. This has been something I have focused on since being elected, working with groups like the RSPCA on dog legislation and how we can encourage more responsible dog ownership here in Pendle. Also local vets, like Stanley House Vets, who have surgeries in Colne and Barnoldswick and excellent local charities like Pendle Dogs in Need who do really important work locally.

Over the past few weeks, there has been a string of announcements which will be of great encouragement to animal lovers. The Government has announced a ban on the sale of ivory, compulsory CCTV in slaughterhouses and said we will increase the maximum sentencing for animal cruelty from 6 months to 5 years. As the RSPCA have themselves said “It’s been a fortnight of incredible news for animal welfare in the UK.”

The ban on the sale of ivory is absolutely essential to protect elephants across the world by decreasing the incentive for poachers to kill elephants at alarming rates. Around 20,000 elephants are being slaughtered every year due to the global demand for ivory, threatening elephants with extinction in some African countries. By doing this the UK is ensuring that we are a global leader in ending the illegal trade in ivory and setting an example for the rest of the world.

Extending sentences for animal cruelty is also essential to deter the mistreatment of animals. Formerly the maximum sentence for animal cruelty was 6 months, but it will now be extended to up to 5 years in jail. I will continue to work with other MPs and charities on animal welfare issues. These important steps will ensure the UK continues to lead the world on animal welfare.