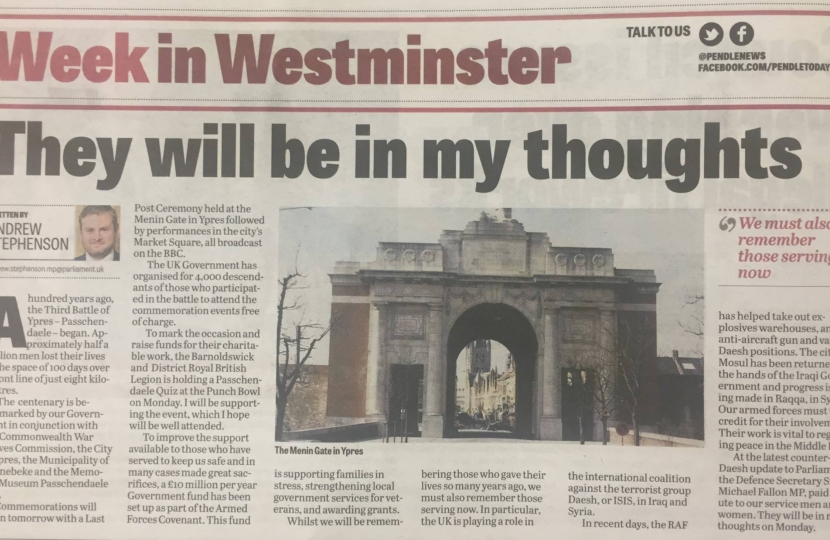 100 years ago, the Third Battle of Ypres – Passchendaele – begun. Approximately half a million men lost their lives in the space of 100 days over a front line of just 8 kilometres.

The centenary is being marked by our Government in conjunction with the Commonwealth War Graves Commission (CWGC), the City of Ypres, the Municipality of Zonnebeke and the Memorial Museum Passchendaele 1917.

Commemorations will begin tomorrow with a Last Post Ceremony held at the Menin Gate in Ypres followed by performances in the city’s Market Square, all broadcast on the BBC.

The UK Government has organised for 4,000 descendants of those who participated in the battle to attend the commemoration events free of charge.

To mark the occasion and raise funds for their charitable work, the Barnoldswick & District Royal British Legion will be holding a Passchendaele Quiz at the Punch Bowl on Monday. I will be supporting the event, which I hope will be well attended.

To improve the support available to those who have served to keep us safe and in many cases made great sacrifices, a £10 million per year Government fund has been set up as part of the Armed Forces Covenant. This fund is supported families in stress, strengthening local government services for veterans, and awarding grants.

Whilst we will be remembering those who gave their lives so many years ago, we must also remember those serving now. In particular, the UK is playing a role in the international coalition against the terrorist group Daesh, or ISIS, in Iraq and Syria.

In recent days, the RAF has helped take out explosives warehouses, an anti-aircraft gun and various Daesh positions. The city of Mosul has been returned to the hands of the Iraqi Government and progress is being made in Raqqa, in Syria. Our armed forces must take credit for their involvement. Their work is vital to regaining peace in the Middle East.

At the latest counter-Daesh update to Parliament, the Defence Secretary Sir Michael Fallon MP, paid tribute to our service men and women. They will be in my thoughts on Monday.