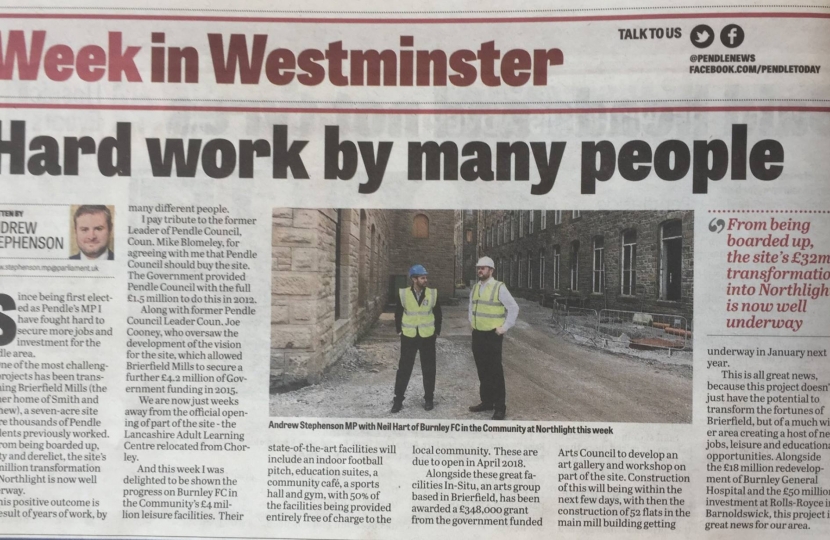 Since being first elected as Pendle’s MP, I have fought hard to secure more jobs and investment for the Pendle area. One of the most challenging projects has been transforming Brierfield Mills (the former home of Smith and Nephew), a seven-acre site where thousands of Pendle residents previously worked. From being boarded up, empty and derelict, the site’s £32 million transformation into ‘Northlight’ is now well underway.

This positive outcome is the result of years of work, by many different people. I pay tribute to the former Leader of Pendle Council, Cllr Mike Blomeley, for agreeing with me that Pendle Council should buy the site. The Government provided Pendle Council with the full £1.5 million to do this in 2012. Along with former Pendle Council Leader Cllr Joe Cooney, who oversaw the development of the vision for the site, which allowed Brierfield Mills to secure a further £4.2 million of Government funding in 2015.

We are now just weeks away from the official opening of part of the site - the Lancashire Adult Learning Centre (relocated from Chorley) and this week I was delighted to be shown the progress on Burnley FC in the Community’s £4 million leisure facilities. Their state-of-the-art facilities will include an indoor football pitch, education suites, a community café, a sports hall and gym, with 50% of the facilities being provided entirely free of charge to the local community. These are due to open in April 2018.

Alongside these great facilities In-Situ, an arts group based in Brierfield, has been awarded a £348,000 grant from the government funded Arts Council to develop an art gallery and workshop on part of the site. Construction of this will being within the next few days, with then the construction of 52 flats in the main mill building getting underway in January next year.

This is all great news, because this project doesn’t just have the potential to transform the fortunes of Brierfield, but of a much wider area creating a host of new jobs, leisure and educational opportunities. Alongside the £18 million redevelopment of Burnley General Hospital and the £50 million investment at Rolls-Royce in Barnoldswick, this project is great news for our area.