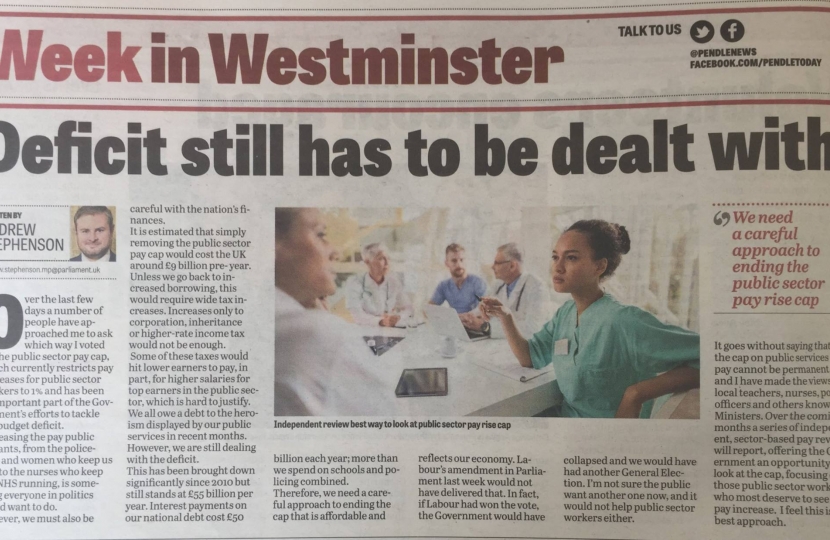 Over the last few days a number of people have approached me to ask which way I voted on the public sector pay cap, which currently restricts pay increases for public sector workers to 1% and has been an important part of the Government’s efforts to tackle our budget deficit.

Increasing the pay public servants, from the policemen and women who keep us safe to the nurses who keep our NHS running, is something everyone in politics would want to do. However, we must also be careful with the nation’s finances.
It is estimated that simply removing the public sector pay cap would cost the UK around £9 billion pre- year. Unless we go back to increased borrowing, this would require wide tax increases. Increases only to corporation, inheritance or higher-rate income tax would not be enough. Some of these taxes would hit lower earners to pay, in part, for higher salaries for top earners in the public sector, which is hard to justify.

We all owe a debt to the heroism displayed by our public services in recent months. However, we are still dealing with the deficit. This has been brought down significantly since 2010 but still stands at £55 billion per year. Interest payments on our national debt cost £50 billion each year; more than we spend on schools and policing combined.

Therefore, we need a careful approach to ending the cap that is affordable and reflects our economy. Labour’s amendment in Parliament last week would not have delivered that. In fact, if Labour had won the vote, the Government would have collapsed and we would have had another General Election. I’m not sure the public want another one now, and it would not help public sector workers either.

It goes without saying that the cap on public services pay cannot be permanent and I have made the views of local teachers, nurses, police officers and others known to Ministers. Over the coming months a series of independent, sector-based pay reviews will report, offering the Government an opportunity to look at the cap, focusing on those public sector workers who most deserve to see a pay increase. I feel this is the best approach.