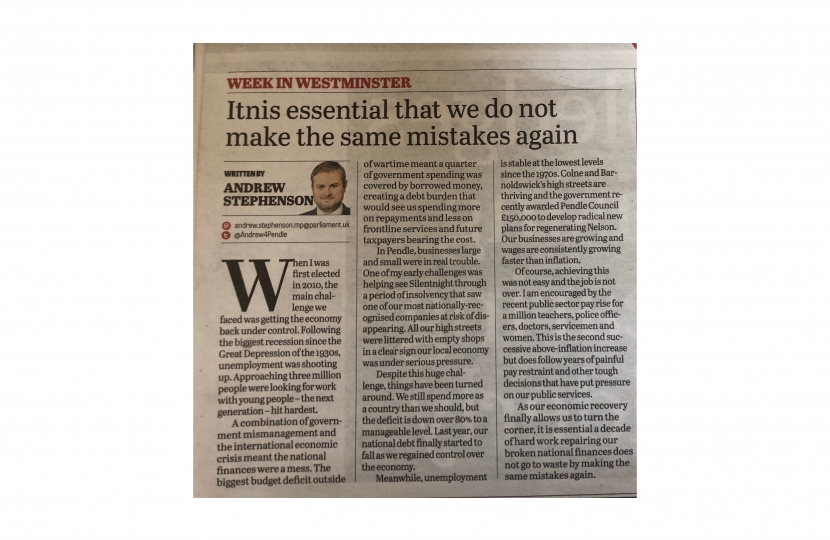 When I was first elected in 2010, the main challenge we faced was getting the economy back under control. Following the biggest recession since the Great Depression of the 1930s unemployment was shooting up. Approaching three million people were looking for work with young people – the next generation – hit hardest.

A combination of government mismanagement and the international economic crisis meant the national finances were a mess. The biggest budget deficit outside of wartime meant a quarter of government spending was covered by borrowed money, creating a debt burden that would see us spending more on repayments and less on frontline services and future taxpayers bearing the cost.

In Pendle, businesses large and small were in real trouble. One of my early challenges was helping see Silentnight through a period of insolvency that saw one of our most nationally-recognised company at risk of disappearing. All our towns’ high streets were littered with empty shops in a clear sign our local economy was under serious pressure.

Despite this huge challenge, things have been turned around. We still spend more as a country than we should, but the deficit is down over 80% to a manageable level. Last year, our national debt finally started to fall, as a share of GDP, as we regained control over the economy.

Meanwhile, unemployment is stable at the lowest levels since the 1970s. Colne and Barnoldswick’s high streets are thriving and the government recently awarded Pendle Council with £150,000 funding to develop radical new plans for regenerating Nelson. Our businesses are growing and at long last, wages are consistently growing faster than inflation, rewarding hardworking people with better financial security.

Of course, achieving this was not easy and the job is not over. I am encouraged by the recent public sector pay rise for a million teachers, police officers, doctors, servicemen and women. This is the second successive above-inflation increase but does follow years of painful pay restraint and other tough decisions that have put pressure on our public services.

As our economic recovery finally allows us to turn the corner, it is essential a decade of hard work repairing our broken national finances does not go to waste by making the same mistakes again.