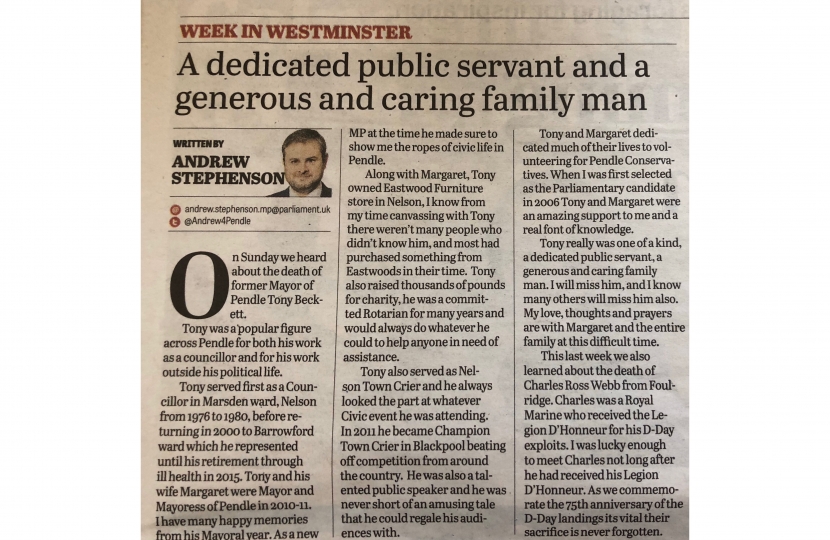 On Sunday we heard about the death of former Mayor of Pendle Tony Beckett.  Tony was a popular figure across Pendle for both his work as a Councillor and for his work outside his political life. Tony served first as a Councillor in Marsden ward, Nelson from 1976 – 1980, before returning in 2000 to Barrowford ward which he represented until his retirement through ill health in 2015. Tony and his wife Margaret were Mayor and Mayoress of Pendle in 2010-11. I have many happy memories from his Mayoral year. As a new MP at the time he made sure to show me the ropes of civic life in Pendle.

Along with Margaret Tony owned Eastwood Furniture store in Nelson, I know from my time canvassing with Tony there weren’t many people who didn’t know him, and most had purchased something from Eastwoods in their time.  Tony also raised thousands of pounds for Charity, he was a committed Rotarian for many years and would always do whatever he could to help anyone in need of assistance.

Tony also served as Nelson Town Crier and he always looked the part at whatever Civic event he was attending. In 2011 he became Champion Town Crier in Blackpool beating off competition from around the country.  He was also a talented public speaker and he was never short of an amusing tale that he could regale his audiences with.

Tony & Margaret dedicated much of their lives to volunteering for Pendle Conservatives. When I was first selected as the Parliamentary candidate in 2006 Tony and Margaret were an amazing support to me and a real font of knowledge.

Tony really was one of a kind, a dedicated public servant, a generous and caring family man. I will miss him, and I know many others will miss him also. My love, thoughts and prayers are with Margaret and the entire family at this difficult time.

This last week we also learned about the death of Charles Ross Webb from Foulridge. Charles was a Royal Marine who received the Legion D'Honneur for his D-Day exploits. I was lucky enough to meet Charles not long after he had received his Legion D'Honneur. As we commemorate the 75th anniversary of the D-Day landings its vital their sacrifice is never forgotten.