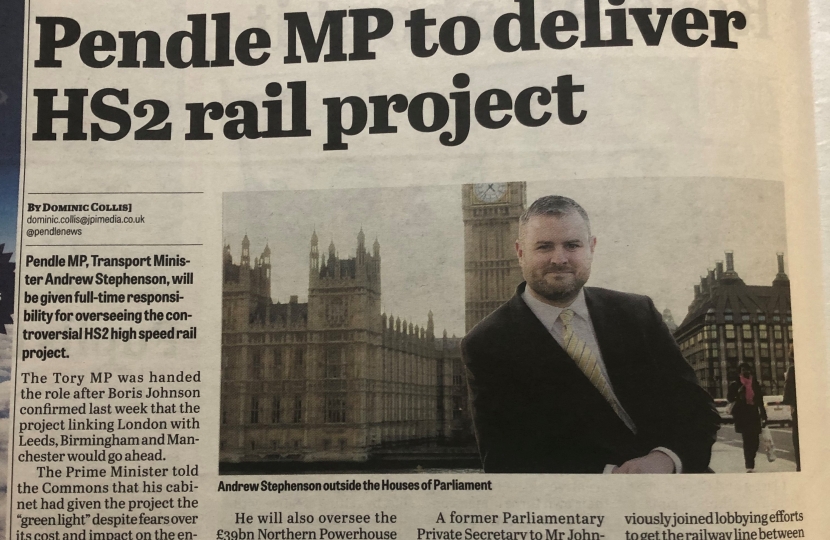 Last week’s reshuffle saw me move on from my role in the Foreign Office, as the Prime Minister asked me to take on a new brief in the Department for Transport.

Specifically, Boris has appointed me Minister for HS2 - the largest construction project in Europe – the high-speed rail link connecting London with Birmingham, Manchester and Leeds. I will also have responsibility for the Transpennine and Northern Powerhouse Rail routes.

As a long-term supporter of HS2 and the Northern Powerhouse Rail projects, but also one that has watched with concern the spiralling costs and missed deadlines, I realise the critical importance of this new role. Supporters of HS2 say it will improve transport times, increase capacity, create jobs and rebalance the UK's economy. Once it is built, journeys will be shorter and while it is being built, it is expected to create thousands of jobs and provide a stimulus to economic growth.

The dedicated Ministerial role was created after the Prime Minister told the Commons earlier this month that HS2 would proceed, but that he would appoint a minister to "restore discipline" to the project. Even the Prime Minister himself acknowledged that continuing with HS2 had been "a controversial and difficult decision".

So, it’s fair to say there’s a lot of work to do! But I also feel that the decision to go ahead with HS2 is exactly the sort of bold, decisive action required to inject confidence in the economy. HS2 also shows the government's commitment to levelling up the nations and regions of the UK.

As someone whose family traces their roots back to the North East of England, indeed to just a few miles from the birthplace of George Stephenson who was renowned as the "Father of Railways" I’ve always been a fan of rail travel. My father’s first job, was working for British Rail and readers will also know of my passion for improving local rail services, whether it be the successful campaign to reopen the Todmorden Curve, fighting for better services on our current line, or the campaign to re-open the Colne-Skipton line.

Serving our country in government is a huge honour but as I’ve always said, Pendle comes first. Whilst this is undoubtably my most challenging role to date, I hope it will provide me with even better insight into how to address some of our own local infrastructure challenges!