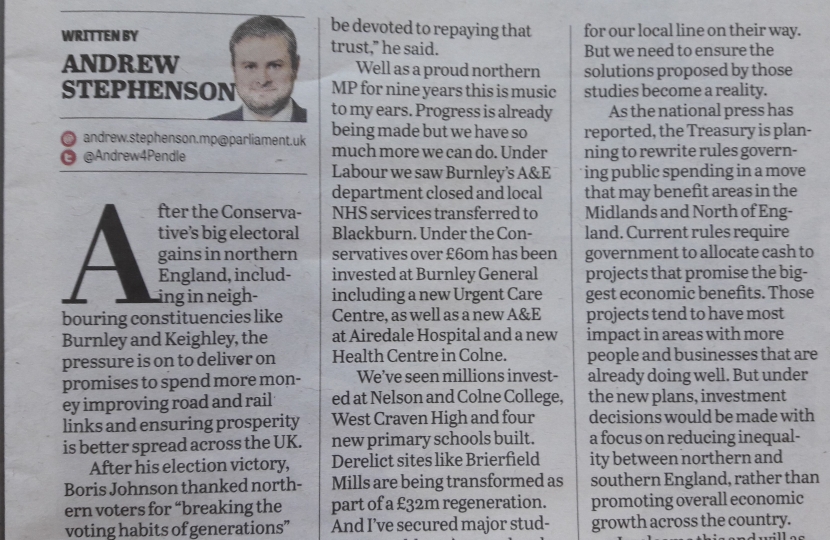 After the Conservative’s big electoral gains in northern England, including in neighbouring constituencies like Burnley and Keighley, the pressure is on to deliver on promises to spend more money improving road and rail links and ensuring prosperity is better spread across the UK.

After his election victory, Boris Johnson thanked northern voters for "breaking the voting habits of generations" and placing their trust in the Conservatives. "Everything that we do, everything that I do as your prime minister, will be devoted to repaying that trust," he said.

Well as a proud northern MP for nine years this is music to my ears. Progress is already being made but we have so much more we can do. Under Labour we saw Burnley’s A&E department closed and local NHS services transferred to Blackburn. Under the Conservatives over £60 million has been invested at Burnley General including a new Urgent Care Centre, as well as a new A&E at Airedale Hospital and a new Health Centre in Colne.

We’ve seen millions invested at Nelson & Colne College, West Craven High and four new primary schools built. Derelict sites like Brierfield Mills are being transformed as part of a £32 million regeneration. And I’ve secured major studies into addressing our local transport problems, following the re-opening of the Todmorden Curve and with new trains for our local line on their way. But we need to ensure the solutions proposed by those studies become a reality.

As the national press has reported, the Treasury is planning to rewrite rules governing public spending in a move that may benefit areas in the Midlands and North of England. Current rules require government to allocate cash to projects that promise the biggest economic benefits. Those projects tend to have most impact in areas with more people and businesses that are already doing well. But under the new plans, investment decisions would be made with a focus on reducing inequality between northern and southern England, rather than promoting overall economic growth across the country.

I welcome this and will as ever be making sure Pendle’s voice is heard loud and clear in the run up to the next Budget.