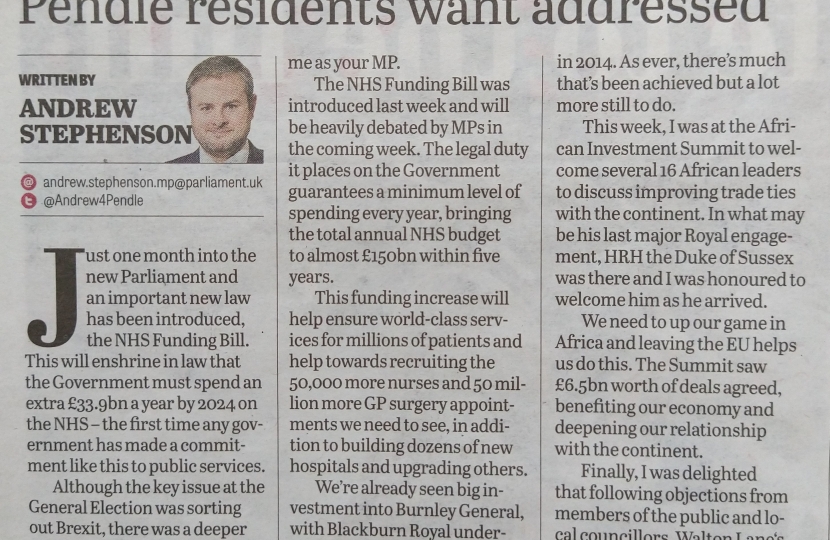 Just one month into the new Parliament and an important new law has been introduced, the NHS Funding Bill. This will enshrine in law that the Government must spend an extra £33.9 billion a year by 2024 on the NHS – the first time any government has made a commitment like this to public services.

Although the key issue at the General Election was sorting out Brexit, there was a deeper desire to see politicians move on to the issues people truly care about. The biggest issue Pendle residents want to see addressed is the NHS, which has always been a top priority for me as your MP.

The NHS Funding Bill was introduced last week and will be heavily debated by MPs in the coming week. The legal duty it places on the Government guarantees a minimum level of spending every year, bringing the total annual NHS budget to almost £150 billion within five years.

This funding increase will help ensure world-class services for millions of patients and help towards recruiting the 50,000 more nurses and 50 million more GP surgery appointments we need to see, in addition to building dozens of new hospitals and upgrading others.

We’re already seen big investment into Burnley General, with Blackburn Royal undergoing improvements too. I’m working with Airedale Hospital which needs new buildings and am pushing for a health centre in Barnoldswick, like Colne’s £4 million Health Centre that opened in 2014. As ever, there’s much that’s been achieved but a lot more still to do.

This week, I was at the African Investment Summit to welcome several 16 African leaders to discuss improving trade ties with the continent. In what may be his last major Royal engagement, HRH the Duke of Sussex was there and I was honoured to welcome him as he arrived.

We need to up our game in Africa and leaving the EU helps us do this. The Summit saw £6.5 billion worth of deals agreed, benefiting our economy and deepening our relationship with the continent.

Finally, I was delighted that following objections from members of the public and local Councillors, Walton Lane‘s Cemetery Lodge has been saved. Pendle Borough Council’s leadership had proposed demolishing the iconic building but must now focus on restoring it to its former glory.