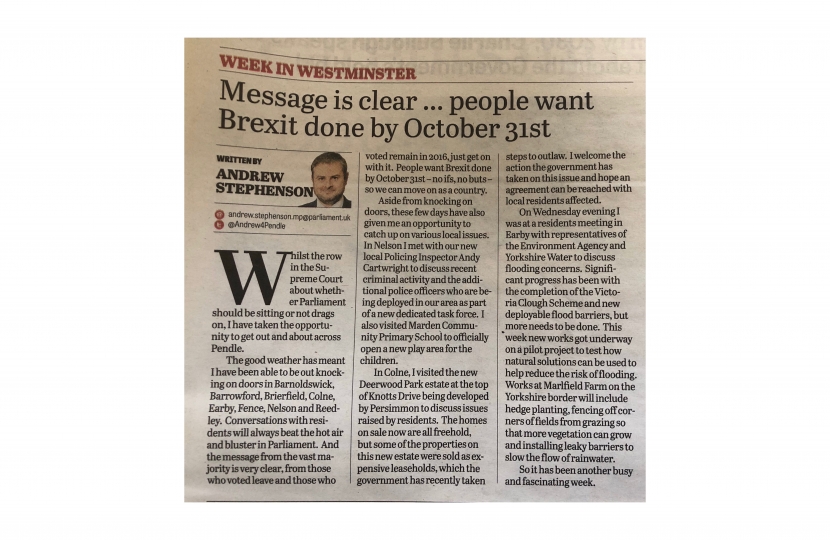 Whilst the row in the Supreme Court about whether Parliament should be sitting or not drags on, I have taken the opportunity to get out and about across Pendle.

The good weather has meant I have been able to be out knocking on doors in Barnoldswick, Barrowford, Brierfield, Colne, Earby, Fence, Nelson and Reedley.  Conversations with Pendle residents will always beat the hot air and bluster in Parliament.  And the message from the vast majority is very clear, from those who voted leave and those who voted remain in 2016, just get on with it.  People want Brexit done by 31 October – no ifs, no buts – so we can move on as a country.

Aside from knocking on doors, these few days have also given me an opportunity to catch up on various local issues.  In Nelson I met with our new local Policing Inspector Andy Cartwright to discuss recent criminal activity and the additional police officers who are being deployed in our area as part of a new dedicated task force.  I also visited Marden Primary School to officially open a new play area for the children.

In Colne, I visited the new Deerwood Park estate at the top of Knotts Drive being developed by Persimmon to discuss issues that have been raised by residents.  The homes on sale now are all freehold, but some of the properties on this new estate were sold as expensive leaseholds, which the government has recently taken steps to outlaw.  I welcome the action the government has taken on this issue and hope an agreement can be reached with local residents who have been affected.

On Wednesday evening I was at a residents meeting in Earby with representatives of the Environment Agency and Yorkshire Water to discuss flooding concerns.  Significant progress has been with the completion of the Victoria Clough Scheme and new deployable flood barriers, but more needs to be done.  This week new works got underway on a pilot project to test how natural solutions can be used to help reduce the risk of flooding.  Works at Marlfield Farm on Yorkshire border will include hedge planting, fencing off corners of fields from grazing so that more vegetation can grow and installing leaky barriers to slow the flow of rainwater.  So another busy and fascinating week.