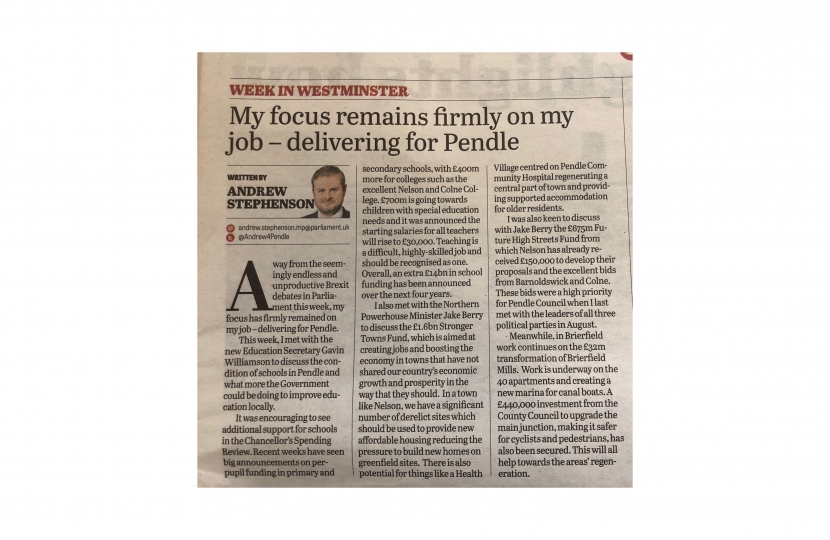 Away from the seemingly endless and unproductive Brexit debates in Parliament this week, my focus has firmly remained on my job – delivering for Pendle.

This week, I met with the new Education Secretary Gavin Williamson to discuss the condition of schools in Pendle and what more the Government could be doing to improve education locally.

It was encouraging to see additional support for schools in the Chancellor’s Spending Review. Recent weeks have seen big announcements on per-pupil funding in primary and secondary schools, with £400 million more for colleges such as the excellent Nelson and Colne College. £700 million is going towards children with special education needs and it was announced the starting salaries for all teachers will rise to £30,000. Teaching is a difficult, highly-skilled job and should be recognised as one. Overall, an extra £14 billion in school funding has been announced over the next four years.

I have also met with the Northern Powerhouse Minister Jake Berry to discuss the £1.6 billion Stronger Towns Fund, which is aimed at creating jobs and boosting the economy in towns that have not shared our country’s economic growth and prosperity in the way that they should.  In a town like Nelson, we have a significant number of derelict sites which should be used to provide new affordable housing reducing the pressure to build new homes on greenfield sites across Pendle.  There is also potential for things like a ‘Health Village’ centred on Pendle Community Hospital regenerating a central part of the town and providing supported accommodation for older residents.

I was also keen to discuss with Jake Berry the £675 million Future High Streets Fund from which Nelson has already received £150,000 to develop their proposals and the excellent bids from Barnoldswick and Colne.  These bids were a high priority for Pendle Council when I last met with the leaders of all three political parties in August.

Meanwhile, in Brierfield work continues on the £32 million transformation of Brierfield Mills.  Work is now underway on the 40 apartments and creating a new marina for canal boats. A £440,000 investment from the County Council to upgrade the main junction, making it safer for cyclists and pedestrians, has also been secured. This will all help towards the areas’ regeneration.