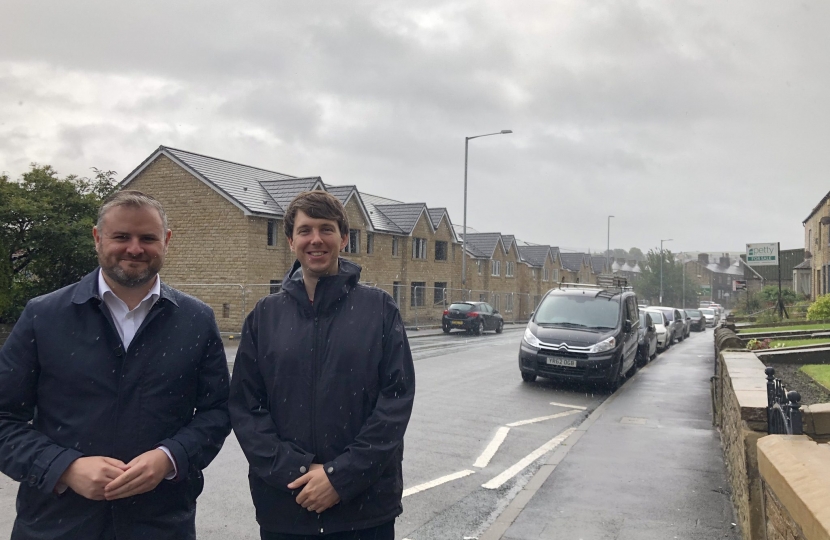 The former Oak Mill site on Skipton Road in Colne is being transformed into a £3.5 million new housing development called Langroyd Place, with 32 two- and three-bedroom family homes and bungalows.  Oak Mill was demolished in 2013 after it became unsafe and unsightly with broken windows, piles of bricks and overgrown with weeds.

In the last couple of week hoardings have been removed from Skipton Road and the development is progressing well.  The developer hopes to complete all the frontages on Skipton Road, by the end of September, with the show home opening the same month.

Deputy Mayor of Pendle and Colne Horsfield Ward Cllr Neil Butterworth said “The site has been an eyesore for years at a key gateway in and out of Colne.  It was bringing down an otherwise very attractive neighbourhood and local councillors have worked hard to find a way to improve this site. The current development is a big improvement – it’s an eyesore no more!”

It’s really encouraging to see how quickly this development has transformed the look of Skipton Road, in a really positive way.  It is a perfect location for housing, regenerating a former industrial site providing new homes close to the town centre shops, restaurants, bars and theatres.  It will be a great place to live.

The site is being developed by PEARL, a joint venture company of Pendle Council and Barnfield Construction.  There have been 3 confirmed sales, with the first residents expected to move in for the end of October / early November.