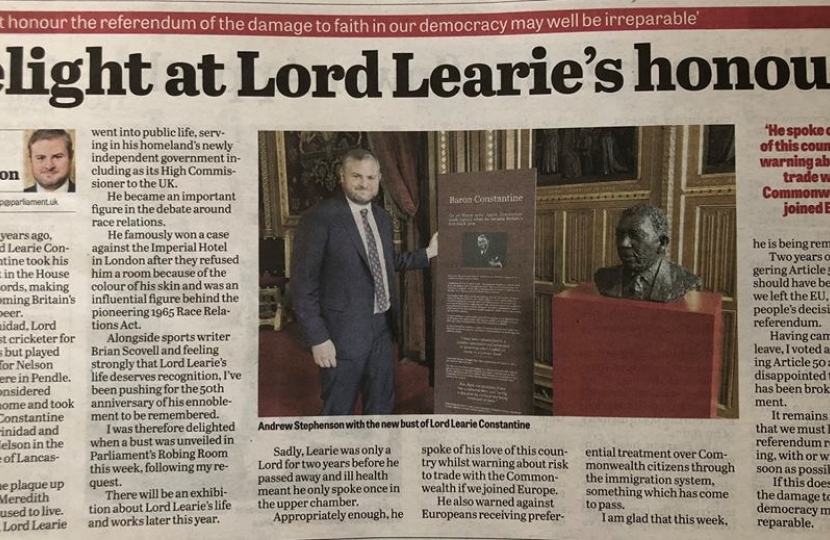 Born in Trinidad, Lord Learie was a test cricketer for the West Indies but played professionally for Nelson Cricket Club, here in Pendle. He always considered Nelson his UK home and took the title Baron Constantine of Maraval in Trinidad and Tobago and of Nelson in the County Palatine of Lancaster. There is a blue plaque up on the house in Meredith Street where he used to live.

After cricket, Lord Learie went into public life, serving in his homeland’s newly independent government including as its High Commissioner to the UK. He became an important figure in the debate around race relations. He famously won a case against the Imperial Hotel in London after they refused him a room because of the colour of his skin and was an influential figure behind the pioneering 1965 Race Relations Act.

Alongside sports writer Brian Scovell and feeling strongly that Lord Learie’s life deserves recognition, I’ve been pushing for the 50th anniversary of his ennoblement to be remembered. I was therefore delighted when a bust was unveiled in Parliament’s Robing Room this week, following my request. There will be an exhibition about Lord Learie’s life and works later this year.

Sadly, Learie was only a Lord for two years before he passed away and ill health meant he only spoke once. Appropriately enough, he spoke of his love of this country whilst warning about risk to trade with the Commonwealth if we joined Europe. He also warned against Europeans receiving preferential treatment over Commonwealth citizens through the immigration system, something which has come to pass. I am glad that this week, he is being remembered.

Two years on from triggering Article 50, today should have been the day we left the EU, following the people’s decision at the 2016 referendum. Having campaigned to leave, I voted against extending Article 50 and am bitterly disappointed that promise has been broken by Parliament. It remains my clear view that we must honour the referendum result by leaving, with or without a deal, as soon as possible. If this does not happen, the damage to faith in our democracy may be irreparable.