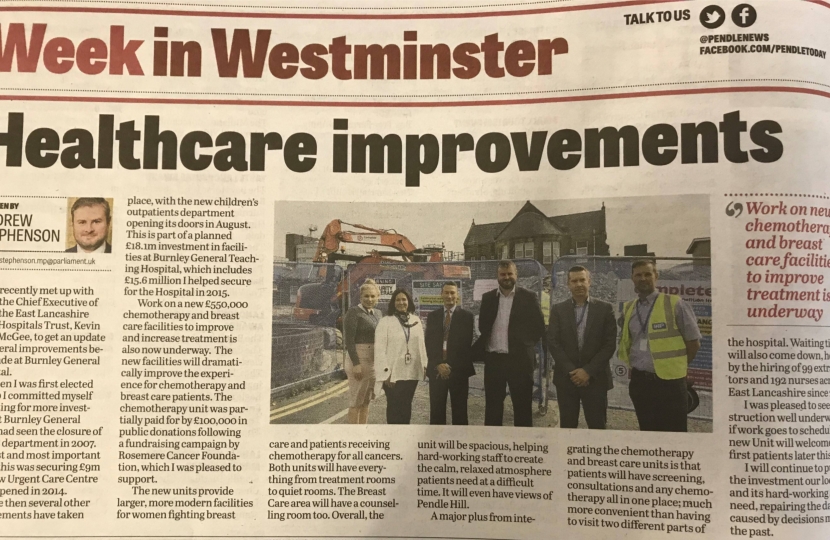 I recently met up with the Chief Executive of the East Lancashire Hospitals Trust, Kevin McGee, to get an update on several improvements being made at Burnley General Hospital.

When I was first elected in 2010 I committed myself to fighting for more investment at Burnley General which had seen the closure of its A&E department in 2007.  The first and most important part of this was securing £9million for a new Urgent Care Centre which opened in 2014.

Since then several other improvements have taken place, with the new children's outpatients department opening its doors in August.  This is part of a planned £18.1 million investment in facilities at Burnley General Teaching Hospital, which includes £15.6 million I helped secure for the Hospital in 2015.

The new Units provide larger, more modern facilities for women fighting breast care and patients receiving chemotherapy for all cancers. Both units will have everything from treatment rooms to quiet rooms. The Breast Care area will have a counselling room too. Overall, the Unit will be spacious, helping hard-working staff to create the calm, relaxed atmosphere patients need at a difficult time. It will even have views of Pendle Hill.

A major plus from integrating the chemotherapy and breast care units is that patients will have screening, consultations and any chemotherapy all in one place; much more convenient than having to visit two different parts of the hospital. Waiting times will also come down, helped by the hiring of 99 extra doctors and 192 nurses across East Lancashire since 2010.

I was pleased to see construction well underway and if work goes to schedule the new Unit will welcome its first patients later this year. I will continue to push for the investment our local NHS and its hard-working staff need, repairing the damage caused by decisions made in the past.