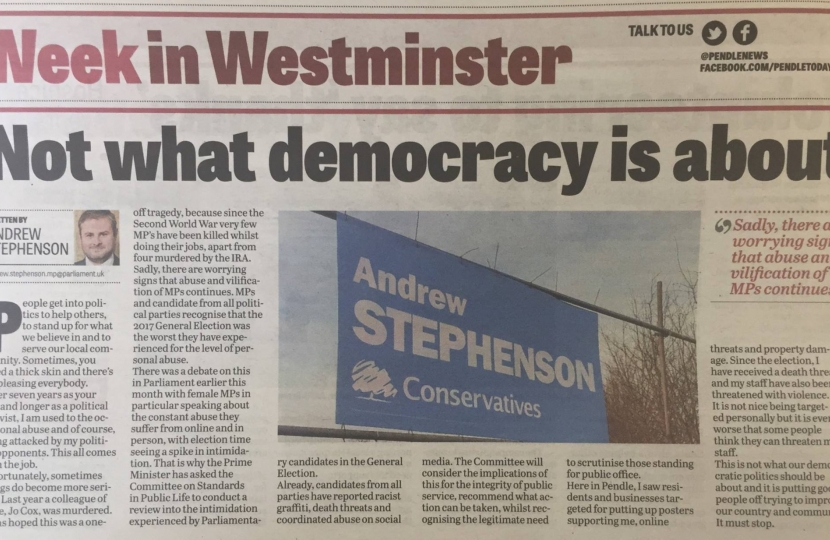 People get into politics to help others, to stand up for what we believe in and to serve our local community. Sometimes, you need a thick skin and there’s no pleasing everybody. After seven years as your MP and longer as a political activist, I am used to the occasional abuse and of course, being attacked by my political opponents. This all comes with the job.

Unfortunately, sometimes things do become more serious. Last year a colleague of mine, Jo Cox, was murdered. It was hoped this was a one-off tragedy, because since the Second World War very few MP’s have been killed whilst doing their jobs, apart from four murdered by the IRA.

Sadly, there are worrying signs that abuse and vilification of MP’s continues. MPs and candidate from all political parties recognise that the 2017 General Election was the worst they have experienced for the level of personal abuse.

There was a debate on this in Parliament earlier this month with female MPs in particular speaking about the constant abuse they suffer from online and in person, with election time seeing a spike in intimidation. That is why the Prime Minister has asked the Committee on Standards in Public Life to conduct a review into the intimidation experienced by Parliamentary candidates in the General Election.

Already, candidates from all parties have reported racist graffiti, death threats and coordinated abuse on social media. The Committee will consider the implications of this for the integrity of public service, recommend what action can be taken, whilst recognising the legitimate need to scrutinise those standing for public office.

Here in Pendle, I saw residents and businesses targeted for putting up posters supporting me, online threats and property damage. Since the election, I have received a death threat and my staff have also been threatened with violence. It is not nice being targeted personally but it is even worse that some people think they can threaten my staff.

This is not what our democratic politics should be about and it is putting good people off trying to improve our country and community. It must stop.