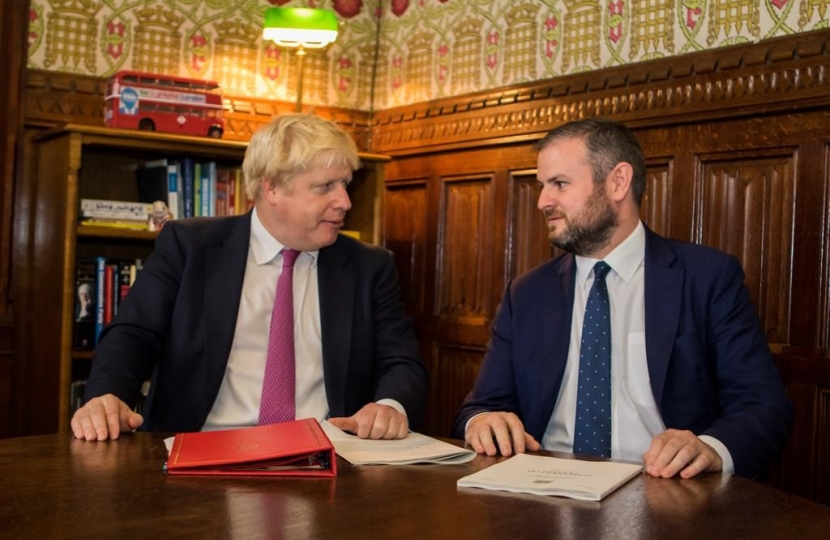 The campaign to elect Boris Johnson as the next leader of the Conservatives has appointed Pendle MP Andrew Stephenson to help rally support in the North West.

Andrew was revealed as the North West Regional MP Co-ordinator, with Lancashire County Councillor Christian Wakeford, also from Pendle, named as the regional volunteer co-ordinator.  The role will see the Pendle MP help run the Tory front runner's operations in the North West, a role that will see him coordinate pro-Boris MPs, Councillors and ordinary party members.

The MP for Pendle is a long-term supporter of Mr Johnson and served as his Parliamentary Private Secretary 2016-2017.  Andrew Stephenson MP said; “It is a huge honour to have been asked to help lead Boris’ leadership campaign in the North West at a time of huge excitement and opportunity for our country.  Boris springs into this campaign with huge momentum, having won the support of over 50% of Conservative MPs. He has demonstrated that he can bring MPs together across leave and remain lines. He is the best placed to unify our party and our country.

"Boris is the only candidate in this contest committed to delivering Brexit by October 31, which will restore trust in our politics.  I’m looking forward to the upcoming campaign, to engaging with members and to making the positive case for why Boris Johnson can make us believe in ourselves again as a country, enable everyone to fulfil their potential and take part in the huge opportunities of this incredible country."

County Councillor Christian Wakeford said “I am delighted to have been asked to co-ordinate The ‘Back Boris’ campaign with the voluntary party in the North West. This has involved the organising of campaign teams for last weekend’s hustings in Carlisle & Manchester along with upcoming members events.

North west members are showing great belief in Boris’ character and plans for both the Country and Brexit and it is a huge honour to be able to coordinate the campaign in the region.”