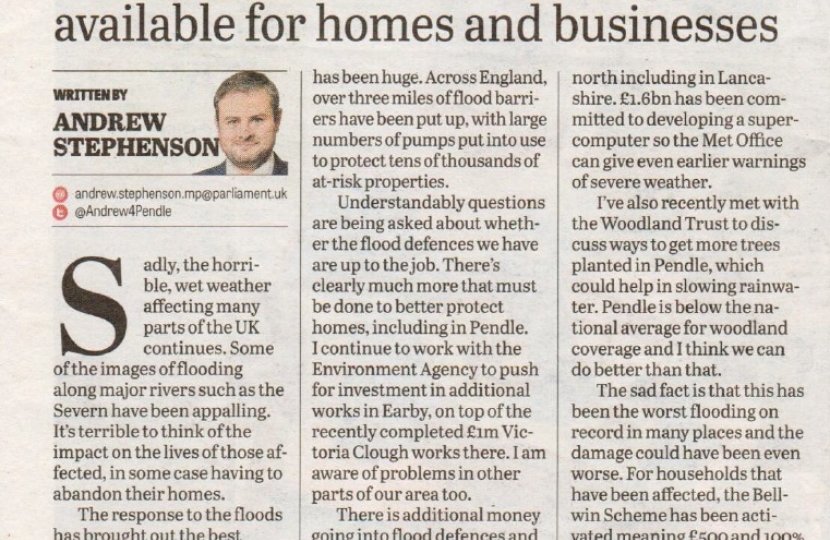 Sadly, the horrible, wet weather affecting many parts of the UK continues. Some of the images of flooding along major rivers such as the Severn have been appalling. It’s terrible to think of the impact on the lives of those affected, in some case having to abandon their homes.

The response to the floods has brought out the best in people, as communities rally together with volunteers working with the emergency services to provide help and keep people safe.

The scale of the response has been huge. Across England, over three miles of flood barriers have been put up, with large numbers of pumps put into use to protect tens of thousands of at-risk properties.

Understandably questions are being asked about whether the flood defences we have are up to the job. There’s clearly much more that must be done to better protect homes, including in Pendle. I continue to work with the Environment Agency to push for investment in additional works in Earby, on top of the recently completed £1 million Victoria Clough works there. I am aware of problems in other parts of our area too.

There is additional money going into flood defences and this has helped. Over the last five years, over £2 billion has been spent on them with another £4 billion to come by 2025. This has seen dozens of new defences installed across the north including in Lancashire. £1.6 billion has been committed to developing a supercomputer so the Met Office can give even earlier warnings of severe weather.

I’ve also recently met with the Woodland Trust to discuss ways to get more trees planted in Pendle, which could help in slowing rainwater. Pendle is below the national average for woodland coverage and I think we can do better than that.

The sad fact is that this has been the worst flooding on record in many places and the damage could have been even worse. For households that have been affected, the Bellwin Scheme has been activated meaning £500 and 100% council tax relief is available to help. Support is also available for affected businesses.

Let’s hope we have a drier spell ahead of us in the coming weeks.