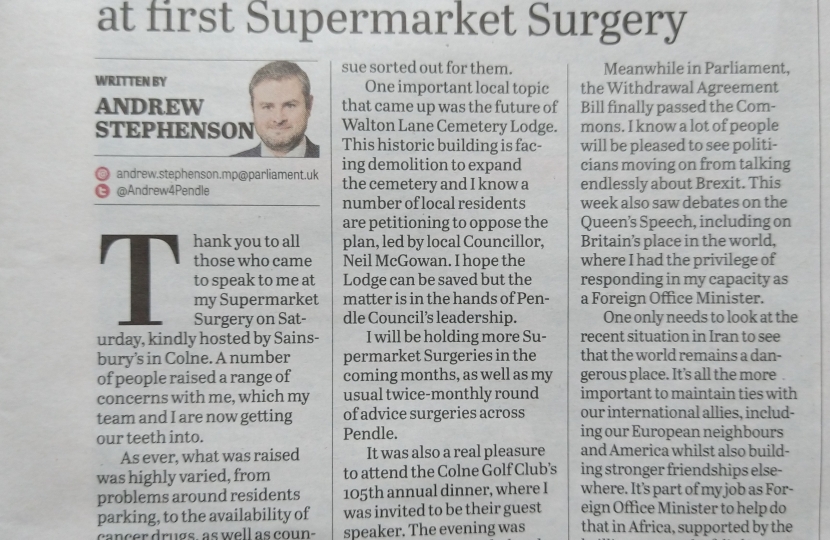 Thank you to all those who came to speak to me at my Supermarket Surgery on Saturday, kindly hosted by Sainsbury’s in Colne. A number of people raised a range of concerns with me, which my team and I are now getting our teeth into.

As ever, what was raised was highly varied, from problems around residents parking to the availability of cancer drugs, as well as council tax and immigration. Some people had more personal problems where they felt I may be able to help get an issue sorted out for them.

One important local topic that came up was the proposed demolition Walton Lane Cemetery Lodge. This iconic building is facing demolition to expand the cemetery and I know a number of local residents are petitioning to oppose the plan, led by local Councillor, Neil McGowan. I hope the Lodge can be saved but the matter is in the hands of Pendle Borough Council’s leadership.

I will be holding more Supermarket Surgeries in the coming weeks and months, as well as my usual twice-monthly round of surgeries around Pendle.

It was also a real pleasure to attend the Colne Golf Club’s 105th annual dinner, where I was invited to be their guest speaker. The evening was great fun, well attended and it was fantastic to be able to show support for one of our many great local sports clubs.

Meanwhile in Parliament, the Withdrawal Agreement Bill finally passed the Commons. I know a lot of people will be pleased to at last see politicians moving on from talking endlessly about Brexit. This week also saw debates on the Queens Speech, including on Britain’s place in the world, where I had the privilege of responding in my capacity as a Foreign Office Minister.

One only needs to look at the recent situation in Iran to see that the world remains a dangerous place. It’s all the more important to maintain ties with our international allies, including our European neighbours and America whilst also building stronger friendships elsewhere. It’s part of my job as Foreign Office Minister to help do that in Africa, supported by the brilliant network of diplomats we have on the continent working together for our national prosperity and security.

Thank you to everyone who came out and supported the Pendle Beer Festival last weekend at the Colne Muni. It was a great event and wonderful to see so many people there.