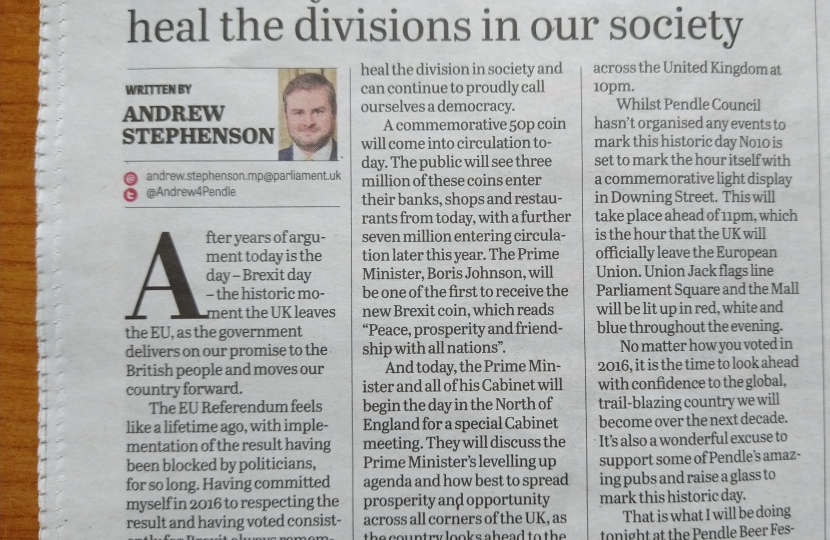 After years of argument today is the day – Brexit day – the historic moment the UK leaves the EU, as the government delivers on our promise to the British people and moves our country forward.

The EU Referendum of 2016 feels like a lifetime ago, with implementation of the result having been blocked by politicians, for so long.  Having committed myself in 2016 to respecting the result and having voted consistently for Brexit always remembering that Pendle voted 63% leave, I am delighted we can finally move on.  We can start to heal the division in society and can continue to proudly call ourselves a democracy.  Regardless of what some out of touch members of the House of Lords think!

A commemorative 50p coin will come into circulation today. The public will see 3 million of these coins enter their banks, shops and restaurants from the 31 January, with a further 7 million entering circulation later this year. The Prime Minister, Boris Johnson, will be one of the first to receive the new Brexit coin, which reads ‘Peace, prosperity and friendship with all nations’.

Whilst Pendle Council haven’t organised any events to mark this historic day No10 is set to mark the hour itself with a commemorative light display in Downing Street.  This will take place ahead of 11pm, which is the hour that the UK will officially leave the European Union. Union Jack flags also currently line Parliament Square and the Mall and government buildings in Whitehall will be lit up in red, white and blue throughout the evening.

No matter how you voted in 2016, it is the time to look ahead with confidence to the global, trail-blazing country we will become over the next decade.  It’s also a wonderful excuse to support some of Pendle’s amazing pubs and raise a glass to mark this historic day. That is what I will be doing tonight at the Pendle Beer Festival being held in Colne Muni, and I urge others to do the same.